DragonflyIndia : Photo of the Year 2008 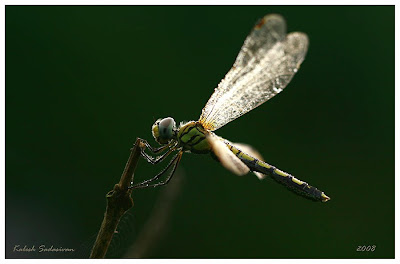 I am attaching a picture taken in Trivandrum,which I hope is my best dragonfly pic of last year, just found him while in was sorting my archives.
kalesh s [kaleshs2002in@yahoo.com] 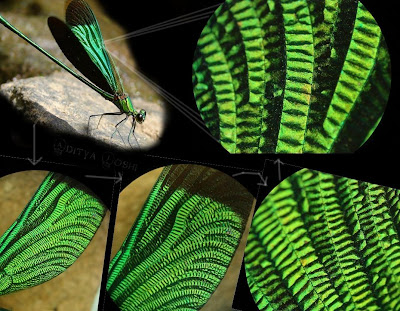 1> Stream Glory Damselfly (Neurobasis chinensis)- Patterns in Nature, A microscopic View:
Patterns in Nature, A microscopic View.... As we all know that most of the things that we see are made up of many small things. So in the same way the structures that we see in nature are also brilliant if we see them in detail. Here you can see a bit of detailed view of Wing structure of Stream Glory Damselfly (Neurobasis chinensis).
addy josh [addy_josh@rediffmail.com] 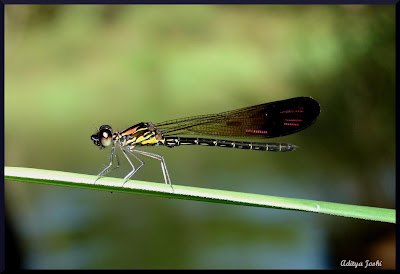 2> Stream Ruby (Rhinocypha bisignata):
This beautiful damselfly from Periyar, Kerala. This Ruby is so amazing that the pattern on its abdomen looks as if the graphics are designed with a purpose. The flame like pattern with black, yellow and orange colours looks amazing. The wings, in sunlight looks as if they have Neon lights in them. Each part is just so attractive that I enjoyed a lot observing these beauties.
addy josh [addy_josh@rediffmail.com] 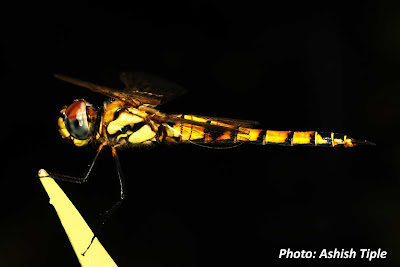 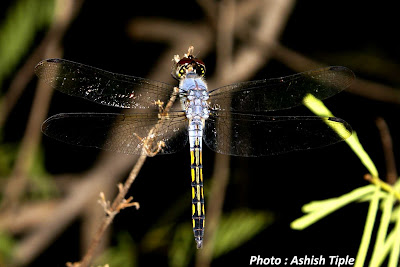 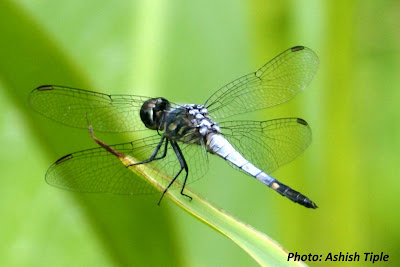 Brachydiplax sobrina
Metallic blue body and yellow base observed on thorax. I am feeling like this is like owner of the farm and watching green farm standing at one corner.
ashish tiple [ashishdtiple@yahoo.co.in] 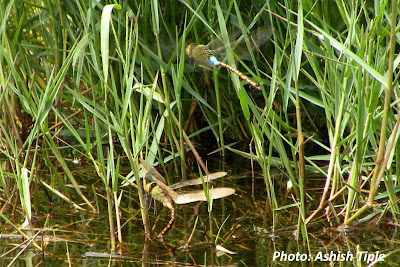 Anax guttatus
Large green and blue dragonfly. This photo I clicked after taking lot of efforts here female is laying and male is protecting her, playing a role of guard. I was satisfied with this snap it is even very memorable and very beautiful
ashish tiple [ashishdtiple@yahoo.co.in] 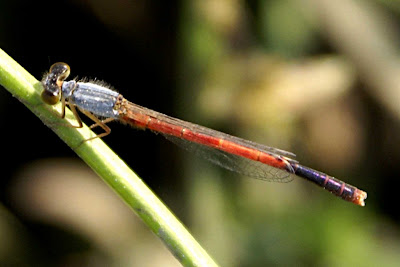 Rhodishnura nursei (mature male)
A small black, crimson and bright yellow damselfly with red color slender back portion. This is very beautiful to watch and I really enjoyed it while capturing in my camera
ashish tiple [ashishdtiple@yahoo.co.in] 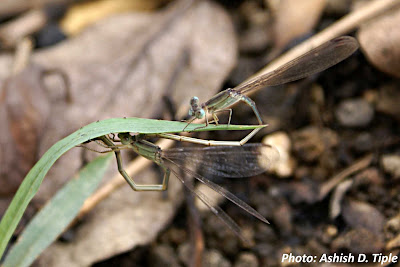 Agriocnemis pygmea
A small apple green and black damselfly and very beautiful you can see mating behavior of both these male and female.
ashish tiple [ashishdtiple@yahoo.co.in] 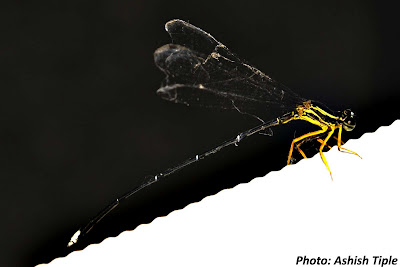 Copera marginipes
Medium sized black damselfly with yellow markings. This butterfly was trapped inside the spider net and finally this escaped and just sits on my collection box and I took nice snapshot.
ashish tiple [ashishdtiple@yahoo.co.in] 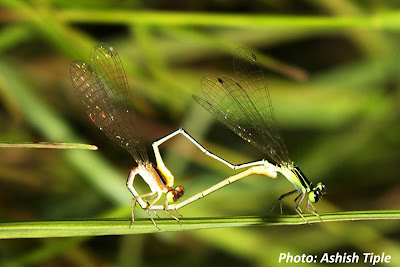 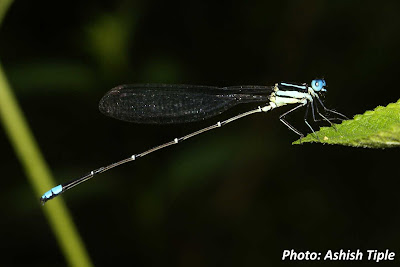 Phylloneura westermanni
This is endemic and rare species damselfly to the Western Ghats between the Nilgiris and Sharavathi Valley. But I clicked it in Pench tiger reserve project area. It was memorable for me even because when I clicked it Dr. R.. J. Andrew and Dr. K. A. Subramanian was also with me


I had always wondered what do these large common club tail feed on. Here is a sequence of photographs depicting the club tail feeding on Wandering Glider (Pantala flavescens) dragonfly. Actually, this particular clubtail dragonfly killed the pantala by biting the pantala's neck after which it began eating its head, removing first its wings and tail before feasting on the thorax completely.
Looks like the other Pantala species perched on the same twig were not aware or perhaps appeared to be least bothered of the feast.
Photo Sequence 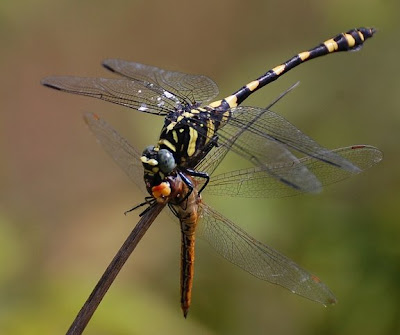 2. Other dragon flies on the same twig still not aware ? 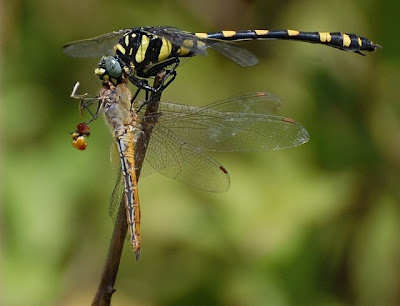 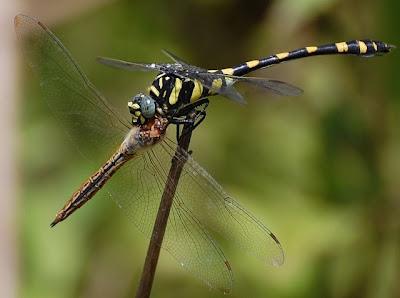 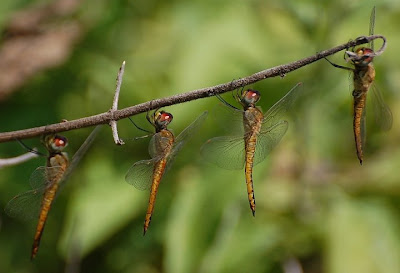 5. Other Wandering Gliders nearby - shows the healthy population during this season 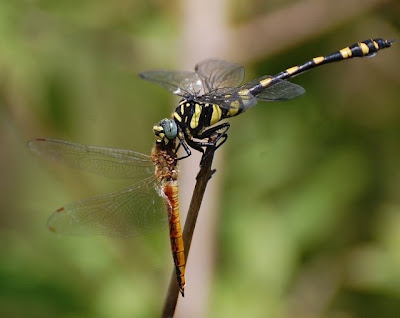 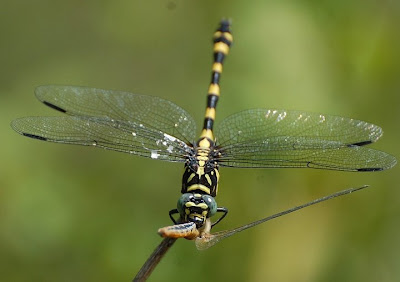 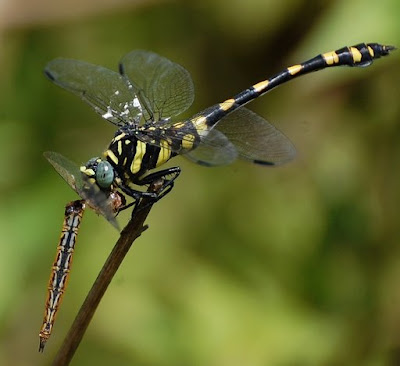 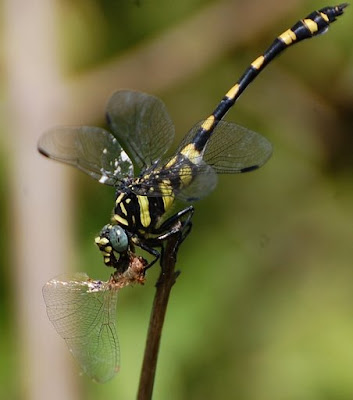 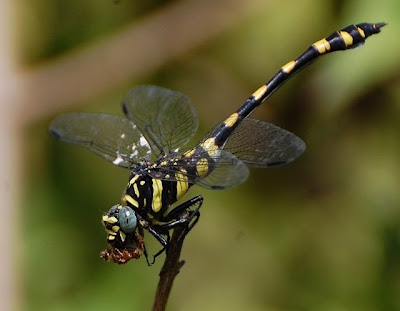 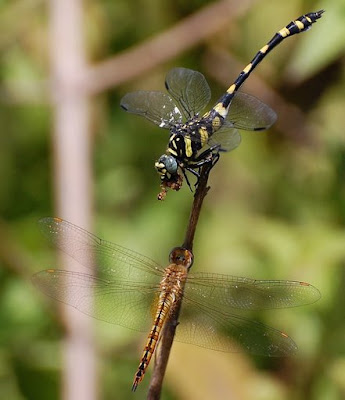 11. Another Pantala comes and sits close by

The entire episode took about half an hour. Here is a link for the complete episode and slightly better visuals