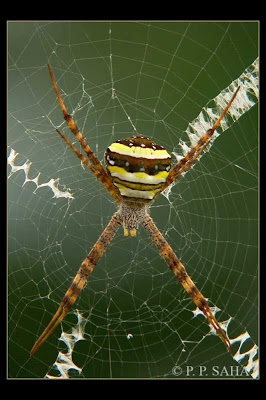 The first one was found at Bindu/North Bengal. It is Signature Spider or Speckled Band Fourlegs.
Partha Saha [ppsaha68@yahoo.com] 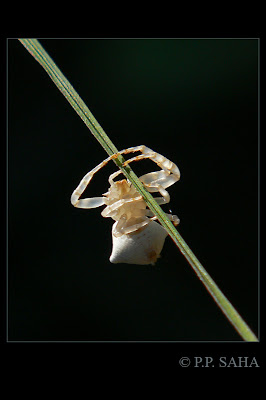 This was found at Ailawng/Mizoram. I tried hard to shoot this because it was very restless. It is Crab Spider. But the name of sp. is not known to me.
Partha Saha [ppsaha68@yahoo.com] 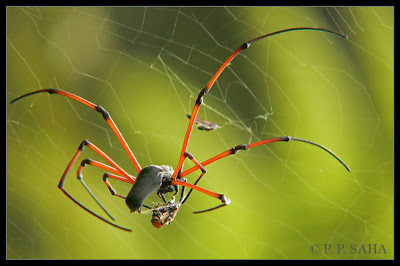 The last one was shot at Suntaleykhola/North Bengal. I was lucky that when I shot this one, it grabbed a prey. I observed many Giant Wood Spider in that forest but this sp. was not found too many. It is Black wood Spider (Nephilia kuhlii).
Partha Saha [ppsaha68@yahoo.com] 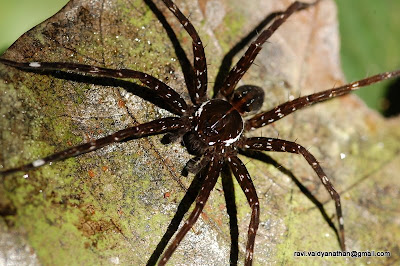 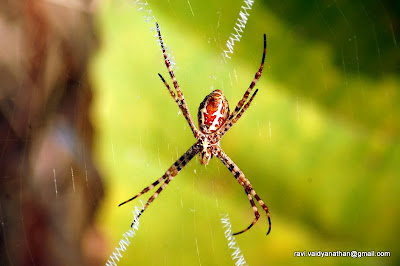 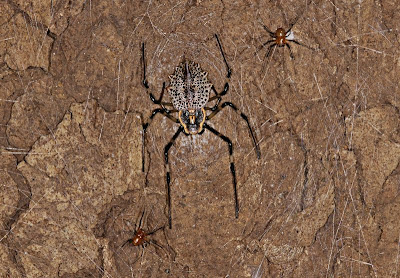 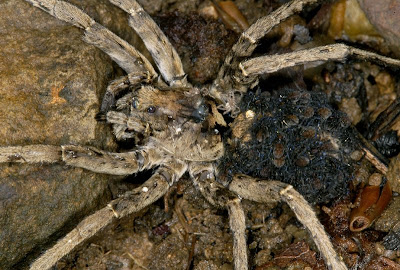 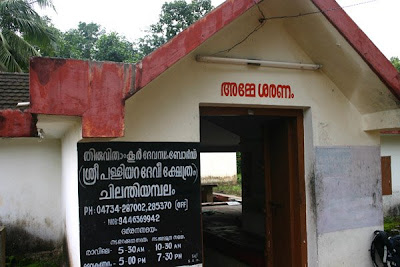 1st one is a spider temple(Probably one and only temple dedicated to the spiders)
David Raju [kochudavid@yahoo.co.in] 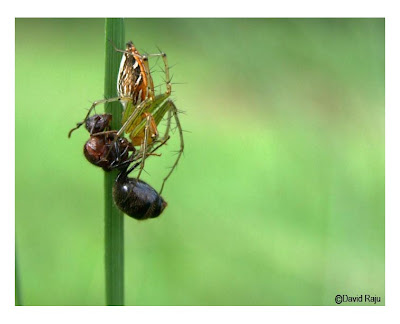 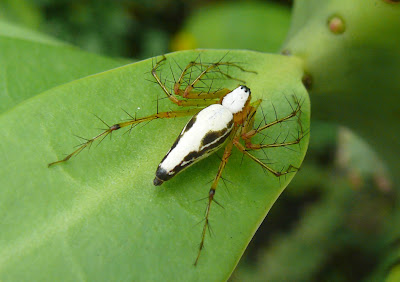 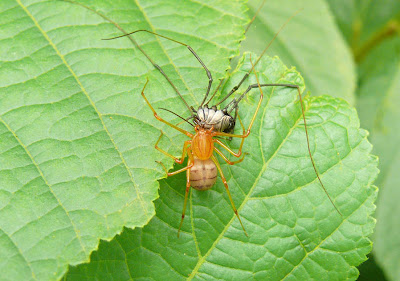 -A Spitting Spider, Scytodes pallida, pouncing on a Harvestman, genus Opiliones, which is not a true spider despite its eight legs. This was photographed in Sanjay Gandhi National Park, Mumbai during the monsoon period.
kiran srivastava [srivastava.jo@gmail.com] 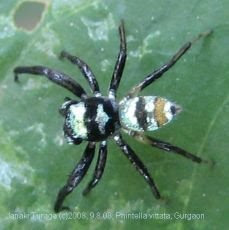 This beautiful spider was found in an overgrown vacant plot in a residential colony in Gurgaon.
It was this iridiscent jewel which wanted to be left alone, but at the same time was also very curious. In order to know the new intervention-the camera, which it possibly perceived to be a threat, it climbed up the branch and to the highest leaf and showed its fangs and waved its pedipalps to scare away the perceived threat. And when that did not work, it jumped on my hand and walked over it and jumped right back to its leaf.
It made my day!
JANAKI TURAGA [janakituraga@yahoo.com] 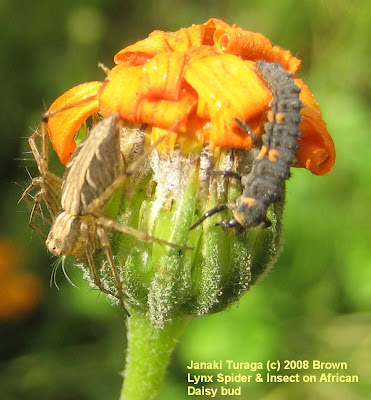 This is my best photo number 2: Brown Lynx
At Hauz Khas District Park, New Delhi, I found these two-the Brown Lynx which was a first sighting for me, and the Lady Bird Larva, on the bud of an African Daisy-orange flowerbud
The Lady Bird Larva was neither the prey nor predator. It roamed all over and the Brown Lynx spider made way for it! It was pretty much amazing.
Well here are both of them sharing space on a African Daisy flowerbud!
JANAKI TURAGA [janakituraga@yahoo.com] 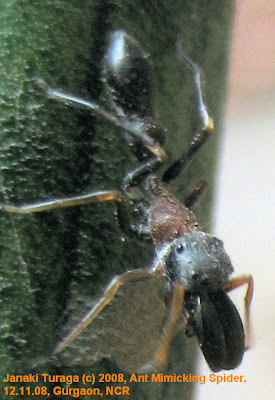 This is my 3rd and final best photo for Spider photo of the year 2008.
This is an Ant Mimicking Spider found at a home and it was difficult to spot this amongst other ants. But this was very common too. It was found walking on the walls and amongst the potted plants, and inside home!
JANAKI TURAGA [janakituraga@yahoo.com] 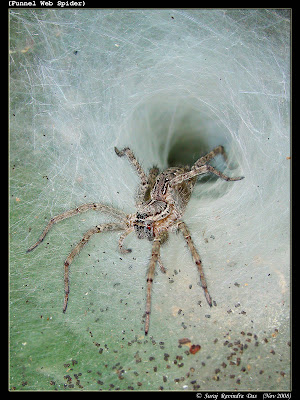 This is one of my best Spider photos of 2008. I had always wanted to get a clean shot of the Funnel Web Spider, but it always slipped in before me.

Finally, at Chinchoti waterfalls last November, waited patiently for this fellow to come out and got a shot of it.

Can sumbody pls identify the species for me . . .
Sur j [no1_suraj@yahoo.com] 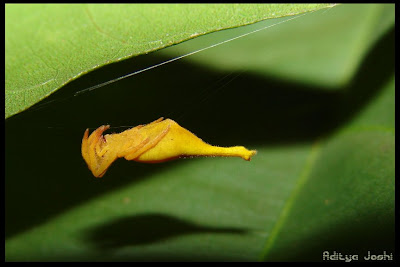 Scorpion Spider : This one is from Periyar, Kerala. It looks like a flower petal and arranges itself in either vertical or horizontal hanging position. From this angle it looks as if it's enjoying his days resting in a Hammock !
addy josh [addy_josh@rediffmail.com] 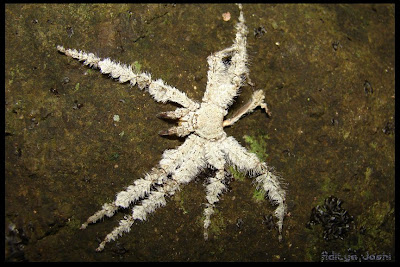 Lichen Spider: This one is from Periyar,It was on a rock near a flowing stream.Saw this while sampling for fishes in second order streams and thought that it's some lichen. This one looks as some organism living in colder regions and hence developed fur !
addy josh [addy_josh@rediffmail.com] 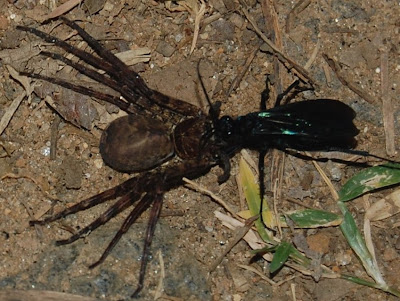 Darkness had now come upon the Thattekad forest in Kerala and we retraced our steps quickly. We had walked some distance when we noticed an on-ground drama taking place – a solitary long legged spider wasp, iridescent blue/black in colour was buzzing and circling around a large spider. Seconds later the wasp dragged along the spider after having paralysed it! The spider may become a reproductive host for its offspring soon.
PS: I have read that there is a kind of tarantula wasp which feeds on tarantula spiders.
Date: 31 Dec 2008
Thattekad forest
Kerala
raghu ananth [raghu_krn@yahoo.com] 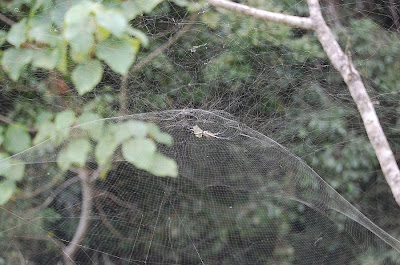 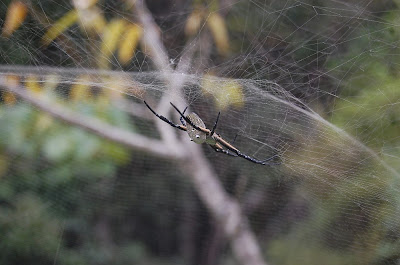 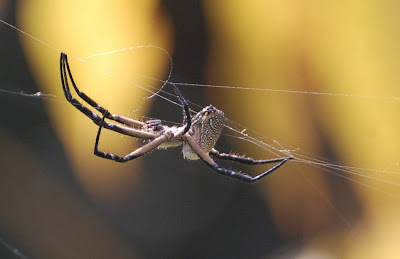 During our Narimale trek, after about 2.5 kms walk up the Bramhagiri hill range we found this beautiful spider in its designer cobweb.(A wood sign board near by mentioned MSL as 1195 meters) . The bright sun rays on the silk threads and the ellaborate dense web made it a very attractive sight. We saw the same handsome spider again while climbing down in the same place and safe.
I would consider it as one of the best Spider images of 2008
( Narimale trek, Iruppu, Bramhagiri WLS, Coorg)
Dec 2008
raghu ananth [raghu_krn@yahoo.com] 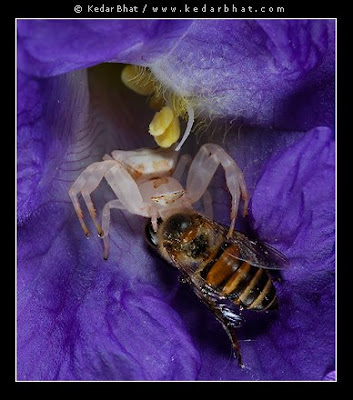